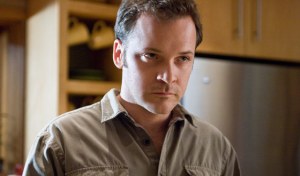 I will haunt your dreams

Dear Orphan Casting Director Ronnie Yeskel,  you have made a huge mistake.  This was supposed to be a horror movie right?  I thought you wanted to scare people–talk about a missed opportunity.

Why didn’t you cast Peter Sarsgaard as the orphan?  He’s just wasting perfectly normal and uncreepy space as the father.  Were you unaware that Peter Sarsgaard was in your movie?  Here’s a tip for making a scary movie, Hollywood.  Step one, get a ridiculous script with lots of holes and tons of gore.  Then, FIND PETER SARSGAARD.

What went wrong?  You followed the formula for the first two steps.  Then what did you do?  You threw him away.  The father! Why?  There better be one heck of a twist in the end, where it turns out Peter Sargaard is using mind-control on that tween.  Last shot: A camera panning over dark woods and Sarsgaard’s unearthly voice whispering softly about why he was born in Illinois but maintains a Southern drawl.

This entry was posted in Advice. Bookmark the permalink.