You won! Congratulations on being inducted into the National Toy Hall of Fame.  It was a hard fought race and it just goes to show you, every election can’t be bought.  Mayor Bloomberg ran a tough campaign—but it turns out he is just not as fun to play with as balls.  Here is an excerpt from his concession speech:

“Ya know, I have to hand it to balls.  I spent 100 million dollars trying to get elected mayor and only 90 million trying to beat out balls for the Toy Hall of Fame.  That was a mistake; funds and energy were unwisely allocated.  Also, I believe my campaign failed to drive home just how much fun it would be to hit me with a bat.

…but balls are what the people want right now.  I have to trust in the democratic system and serve the public in my own small way, as mayor of New York City.”

I’m not sure an extra 10 million dollars would have convinced me that I’d enjoy tossing Mayor Bloomberg around with a friend.  Unless he used the money to change his bones and muscles into rubber, but I’m pretty sure that would be more like an extra 30 million.

Honestly, Mayor Bloomberg just never recovered from the September debate when he showed up covered in glitter.   That’s where you really took him, balls.  Rather than taking plays from your playbook, the Mayor should have focused on his own strengths—education and the ability to wear a suit.

Regardless, you ran a strong campaign and I really appreciated the free exchange of ideas.  You really raised good points about Mayor Bloomberg not fitting through regulation baskets, but you never went after him for only coming in one color.  It’s nice to see clean politics after watching John Corzine drag Legos through the mud two years ago.

What I want to know is what exactly is all the “drama” they can do without?  Why does that man seem chemically unbalanced? What larger, more human things has he killed when he “freaked”.

Don’t worry, it’s “guaranteed to kill the mice”.  The mice literally do not have a shred of hope for survival.  Ortho’s patented last twenty minutes of Scarface design was rigged from all the retainers the engineer’s thirteen-year-old never wore.

Also, I don’t buy these two individuals not wanting to touch the dead mouse.  Not the way they’re waving that death tomb around all over their kitchen counter and still drinking a mug of warm beverage.

However, I have figured out why I never managed to catch any of my apartment pests.  Apparently, the Ideal Toy Company is not in the extermination business. 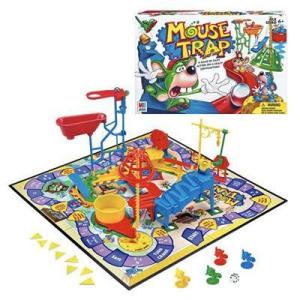 This thing is completely inefficent at killing anything besides a few hours on a rainy afternoon (and my decision-making skills).  My biggest mistake was trusting a scuba diver.